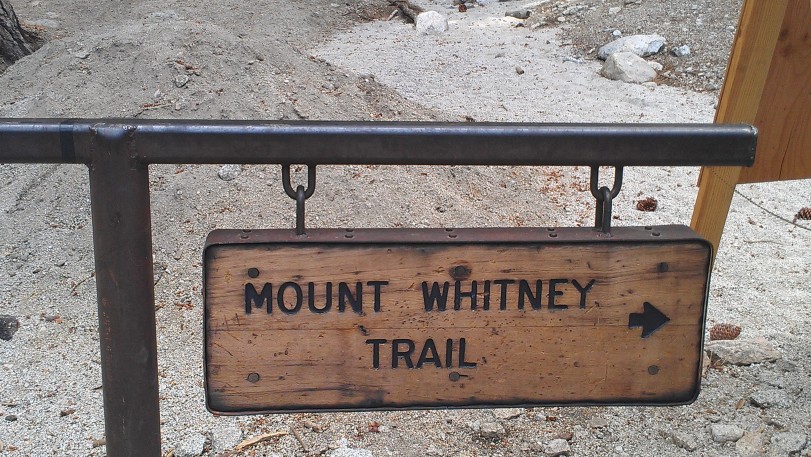 Well, it’s the highest mountain in the lower 48!  What an adventure…  There are multiple routes to hike to the summit of Mount Whitney at an unthinkable elevation of 14,497 feet above sea level.  I have decided to break this post up into two parts because we first hiked the mountaineer’s route but unfortunately didn’t make it to the summit because of the weather.  Our next approach from the main Mount Whitney Trail to the summit was successful, but as I mentioned I’ll hold that to the next post.  With that said both experiences were amazing.  The mountaineer’s route is a bit more direct with a decent scramble / 3-4 class climb up a gulley the last 2,000 vertical feet to the summit.  This route is about 7 miles, while the main Mount Whitney Trail is around 11 miles.  So, where did we begin?

Our trip started early Thursday afternoon from South Lake Tahoe driving down to Tioga Pass. The plan was drive down Thursday afternoon and car camp on Tioga Pass and then leave early Friday morning to pick up our permit from Lone Pine.  We have been trying for four years to get the Mount Whitney permit and this was finally our year!  All three of us were super stoked about the opportunity.  Driving down Highway 395 towards Tioga Pass is an awesome experience in itself.  We passed through Mammoth Lakes with gorgeous Sierras on our right.  The site of Mono Lake is pretty remarkable as well.  Once we got passed Mono Lake, we made a right onto Tioga Pass.  Prior to the entrance to Yosemite, we found a great camping spot for Thursday evening.  The trip took about two hours.  Below are some pictures. 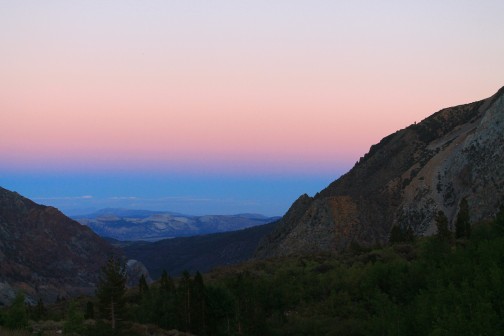 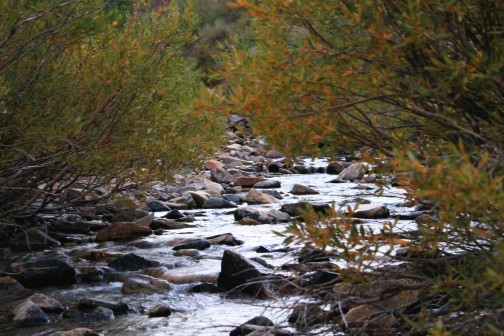 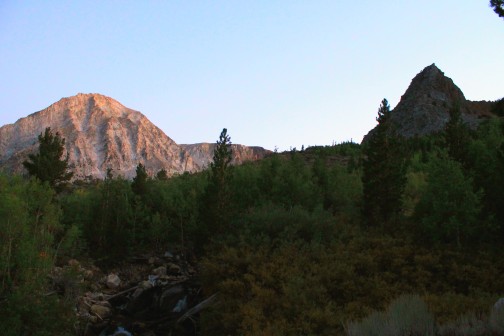 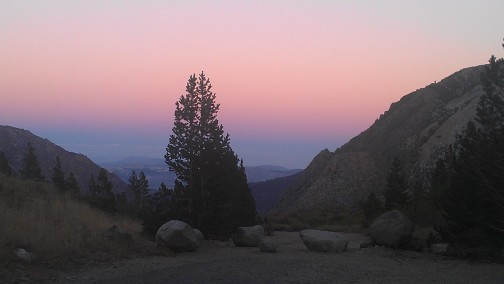 We woke up early the next morning to drive down to Lone Pine, which would take approximately two hours.  Once we got to Lone Pine, we stopped in the station to pick up our permit and wag bags.  We were off to the Whitney Portal.  Lone Pine is at an elevation around 3,700 feet and the Mount Whitney Trailhead begins around 8,300 feet, so it’s quite the drive up.  We reached the trailhead, organized our packs and were off on the Whitney Trail.  The trail starts with a few switchbacks to gain some elevation and then crosses over the Corrillon Creek.  Once you come to the second stream crossing, make a right up the dirt hill, just prior which is the start of the mountaineer’s route.  It will be about 30 minutes into the hike.  We continued up some switchbacks following the trail up the tree covered chute.  You will come to the right of the chute where you can follow the ledges.  There’s really not much of a trail on the ledges, and it’s not super obvious.  We came to a section where we started to pull out our ropes and climb, but realized it wasn’t necessary.  There is one landmark that defines the start of the ledges and that’s a decent sized single tree.  We found that and traversed the ledges until we sloped back down into the chute. We follow along until we reached the top of the chute and could see Lower Boyscout Lake.  Below are some more pictures. 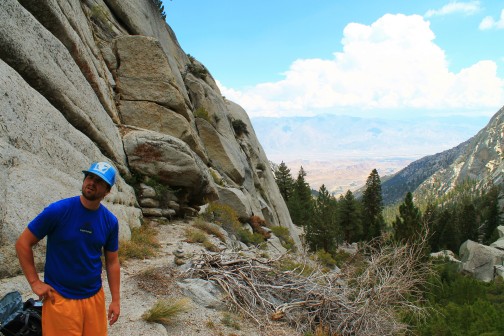 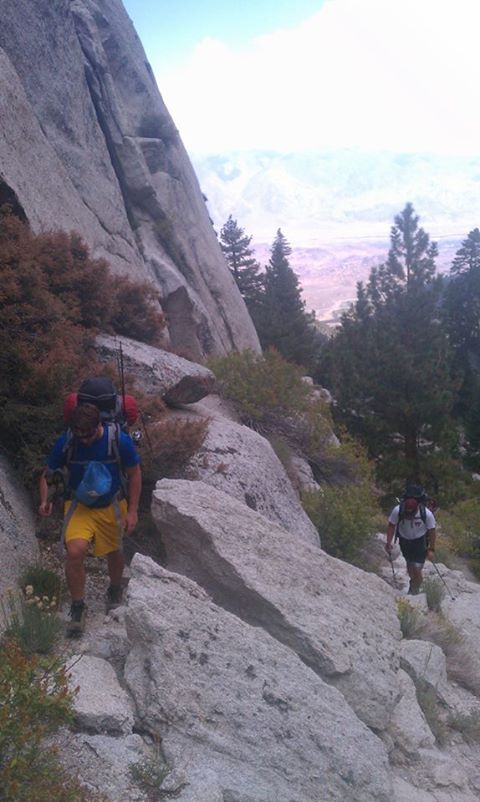 The Lake was quite low.  We used our new Katadyn water filter from Tahoe Mountain Sports and filled up our water bottles.  There are a few ways to trek up from there, all ending at Upper Boyscout Lake.  We unknowingly took the more difficult of the three routes.  You can go right along a large boulder, which is the most direct.  You can go up the center, which follows the stream across low angled slabs.  Finally, you can go left which requires going over several boulders, which is what we did.  With that said, once we made it over the small ridge we had amazing views and could see Upper Boyscout Lake.  From the lake, you can see the massive steeples and Mount Whitney!  Covered in clouds, it was pretty tough for us to see, but with the weather moving quickly, we did have some good sites.  We set up camp for the evening, did some fishing, and ate some dinner.  We saw a huge boulder come crashing down from the peak above.  It sounded like thunder and something I had never seen before so that was really cool.  We literally slayed the trout in Upper Boyscout Lake.  The fishing was spectacular!  Below are more pictures! 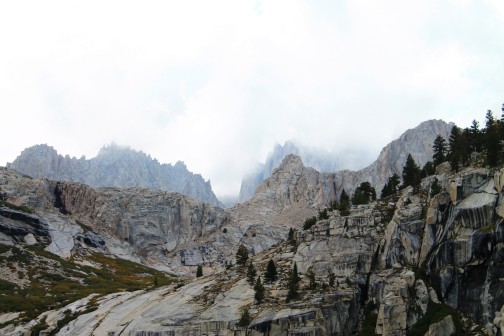 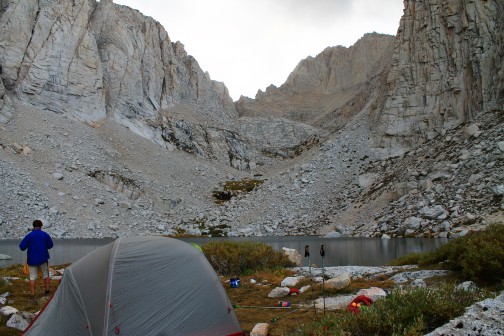 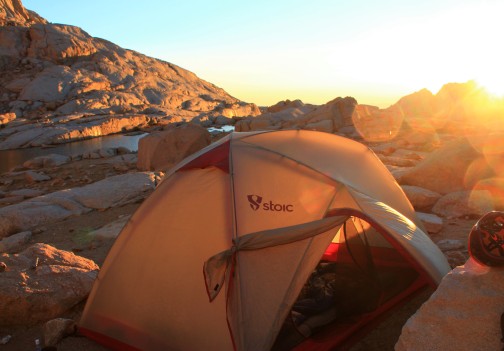 After a good night sleep, with a few raindrops falling overnight, we woke up early Saturday morning to hike to Iceberg Lake and summit Whitney.  The temperature wasn’t too bad at this point.  We brought one pack with water, harnesses, helmets, rope, etc. for the summit.  It’s about 2,000 more vertical to Iceberg Lake.  Backed up to Upper Boyscout is a pretty large peak, so to get to Iceberg, you want to go south around that peak.  There are a few paths up to Iceberg Lake and so we followed one path up slabs and talus to the south.  The trail then leads west over what seems like endless rocks and boulders.  Finally, you’ll come to visible water evidence and hike up a pretty steep section.  Once you reach the top, you will see beautiful Iceberg Lake and the gulley leading up to the summit of Whitney.  We did all of this to find the weather to be cloudy and really force us to hold off on summiting.  We met a few hikers at the lake who gave us some great advice on how to hike up the gulley, but unfortunately it just wasn’t weather permitting.  We had a decision to make…

Our options were to go back to camp at Upper Boyscout and bring camp up to Iceberg to summit the next day or hike all the way back to the trailhead and hike the main Mount Whitney trail.  We were almost guaranteed to summit hiking the main trail versus risking having bad weather on Sunday and not summiting again.  We decided on the former so we were off back down to Upper Boyscout, packed up camp there in the rain and started the trek out…